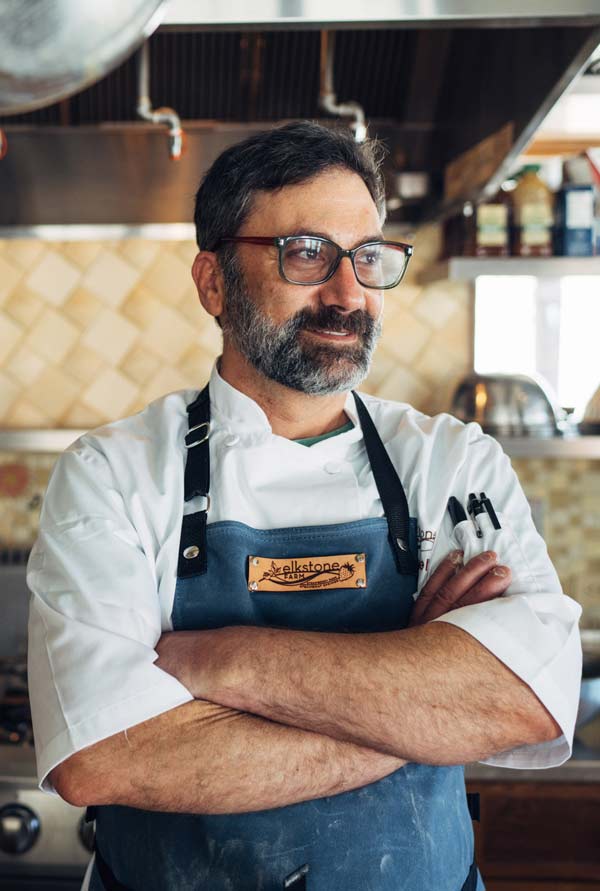 Chef Russell was born on eastern Long Island, New York, a historically agricultural area. Gardening and local food were an important part of Russell's life from a young age, and he developed an early affinity for cooking and food science. While attending Emory University, he also worked in a local bakery learning the basics of baking and pastry. Russell later earned a graduate degree in epidemiology and spent more than a decade working in medical science before returning to cooking. For many years he worked in restaurants and hotels, eventually arriving in Vail, Colorado where he lived and worked before making Steamboat his home.

These days, cooking on the farm is an exhilarating experience for Chef Russell, one in which seasons truly inform his daily work. The farm’s kitchen overlooks the pond garden where he can see fruit developing and ripening. Whether it’s red currants right outside the window or apples and cherries just a few feet away, for a chef to touch the produce as it grows and choose the perfect moment for harvest is truly a rare experience that Russell relishes.

Building equitable and sustainable local food systems is an especially important aspect of Chef Russell’s broader work. After experiencing food insecurity as an adult, his eyes were opened to the issue of hunger in our society. Now, Russell interacts with our community’s food systems to reduce waste and rescue some of the billions of pounds of food discarded every year. Chef Russell is an avid culinary gardener who spends most of his free time in the garden with his wife.