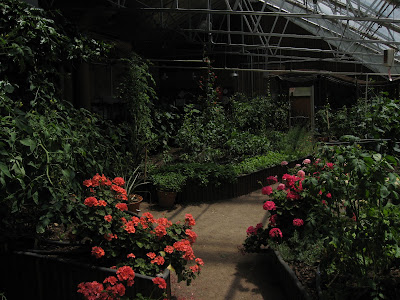 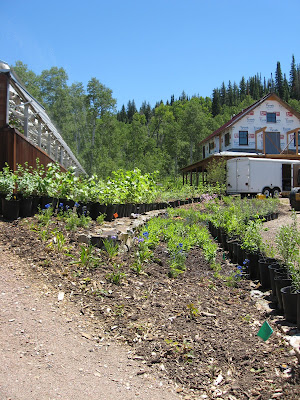 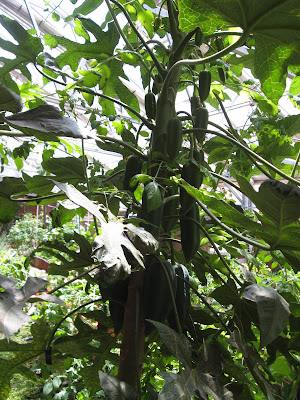 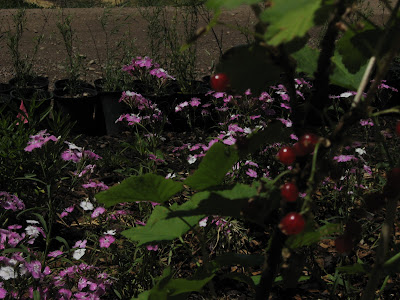 It’s been a busy few weeks at the farm, as is expected in spring! Now it’s already summer.

What we’ve been up to is pretty much getting the farm in order for real outdoor farm production: spreading compost and mulch, cover cropping, weeding, raking new beds, planting seeds and plants… and the never ending watering! We also have been keeping the greenhouse in full swing, producing and selling out of there.

In the greenhouse, we have planted out all of our hot season annuals. These include the usuals, like tomatoes( 4 kinds), peppers (3 kinds), eggplants (3 kinds), basil( 4 kinds), cucumbers, something else that I’ve likely overlooked… as well as seeding more salad greens, and turnips, radishes, kale, parsley, cilantro, and dill. We’ve started our outdoor annual crops with just squash and brussels sprouts for this year. The squash didn’t do so well last summer/ fall inside, so we’ll try a drier environment outside. The Brussels sprouts taste better after they’ve been touched by frost, so we’ll give them that, as hopefully it will be much warmer inside this year. As for more outdoor annual crops, we’re holding out for next year to really dig in to those. The annual production beds will be around the pond. We continue to work on improving the soil in the raised beds inside, which is easy when we re-do annual beds, but tougher when trying to work around the perennials. We have citrus fruit, passionfruit, and papayas fruiting, a few figs, and artichokes, and I have transplanted the pineapple and guava plants, as they were not performing up to our standards. No free rent here! But I gave them a second chance, in pots with some nice rich soil where I can keep my eyes on them.

As for outdoors, the final grading around the pond was completed last month, and we seeded that area with rye and clover to keep the weeds out until we’re ready to plant there. We covered it with straw to deter birds from eating it, to keep any moisture in the soil, and to keep it from blowing or washing away. It has sprouted in most areas; some rain would help. Deano also has raised the water level in the pond by about a foot.

We also just finished seeding the fenceline. This mile long bare swath seems pretty prominent from across the valley, and I’m sure we all as well as the neighbors are very eager to green it up again. Bring on the rain! It’s needed. The fence has not yet arrived on site, but rumor has it that it will this week. Let’s hope so.

We need that fence to keep out the wildlife. A pair of elk were spotted the other day, but the moose has been elusive for a few weeks. Plenty of deer tracks, though. We are especially eager to keep them out, as we have plants outdoors now. The cutting-flower garden out front is getting established, and some of these perennials are starting to bloom. The perennial herbs that we started from seed (sage, oregano, lavender, lovage, and thyme) have settled into their new home outside the east door. We’ve also moved most of our 5 gallon containers of shrubs and trees to this front area for ease of watering. This includes the shrubs left over from last year when we planted the agri-forest, as well as the orchard plants that we potted up this spring in the greenhouse. We also have plenty of strawberry plants in ground outside, and some raspberries too. Some of the berries (currants-black, white, and red) and raspberries are fruiting. So, we need this fence! We will not become a salad bar for wildlife.

We are now harvesting twice a week, and delivering our goods directly. This seems to be a great partnership so far. 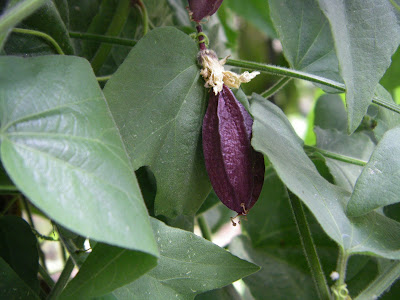 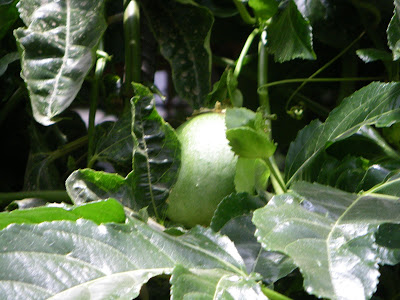 Here are some pictures of the different passion fruit that are growing on the trellis.